Above is an avenue of lime interspersed with hazel, beech and some ash. The wood was thinned and coppiced around Christmas 2015 and the picture taken in February 2017. The truffle are already fruiting although small due to drought in 2016. When the hazel has been coppiced note the leaving of at least 3 main stems; to relieve the stress on the truffle. I copied this practice from a Borchi orchard I visited in the Poe Valley in 2011 and then found a head forester in Sussex who continued to practise this method - one that he had learned from his grandfather who had worked on the same estate. This particular piece of England and its woodland supported before the wars a small truffle industry and redheaded pie maker. 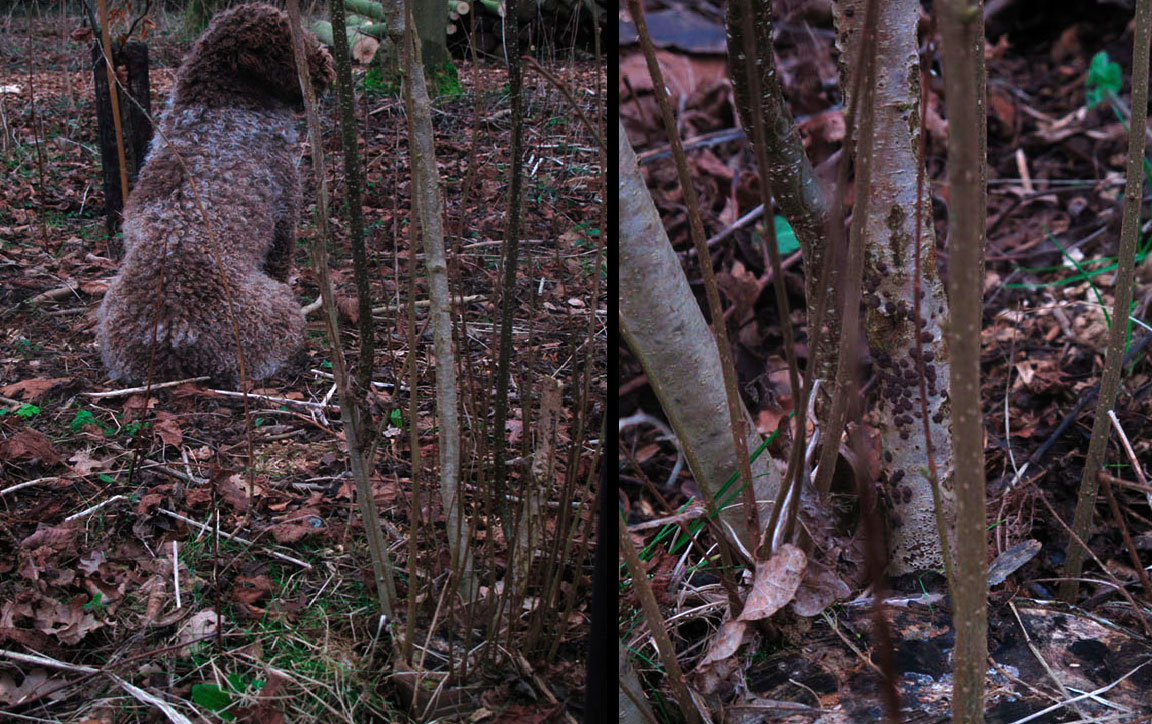 The coppicing of England's forest by a demanding conquering and expanding population did give rise to our small truffle industry and probably also to many other species, fauna and fungi, infact it would have created a very different world.The light tread of many men and women with their horses, felling trees and harvesting and making endless essential domestic and agricultural products encouraged truffle to thrive.

The truffle is a good marker that all is okay with the forest. As I write this brief description of the little I have learnt it is Febuary 2017 and, yes, we have had plenty of rain but I expect we still need much more. The beech stands up on the high Sussex Downs where the wind blows and the beech grows strong, but in 2016 the trees were struggling for water and the ground had been so dry that many of the soil-born fungi that the dogs would normally dig for me during the autumn had just vanished (their fruiting bodies at least). The aquafas are low and we are out of touch.

Why should we know anymore as only a few of us still have an excuse to explore these lands but not many. We are so busy with our own nests that we have forgotten toinclude the the trees, and they are dying. The global speeding of travel and the breakdown of international environments is taking its toll. Our tiny island has a few forests left and one of its vocal mouth pieces to the spread news is the truffle, a direct reflection of the health of their habitats. In the picture above the south-facing hedge has been cleared away and replanted. The hawthorn had taken over this area, and will soon return if left unattended (pictured right).

I have just described one wood as an example but of course they are all different. Note the beech and its good progress from a planting in autumn 2016. The whole wood has had a replanting of beech and hazel. None of the trees were truffle-infected trees but I am guessing where all native English born and raised outside. This accounts for the beech's good growth as opposed to a poly tunnel, heated truffle tree that would be less than a quarter of the size. The wood already has a very strong truffle-producing predisposition so there has been no need to purchase infected trees. The light allowed in from the south side will be another benefit to the truffle production hopefully.. As seen above some areas of thorn have been left. The soil is a red limestone brash clay loam sitting on hard limestone rock which allows the land to be well drained.

Harvest
autumn 2019 started harvesting woods that had been thinned and coppiced three to four years ealier; the harvest has been suffecient for the truffle dealer to pay my wages and the farmer for his crop This is trial project and so far is working well. image taken